CHOCKFAST ® Chockfast® has been used in the construction of the Thames Barrier, plus many other major engineering projects. END_OF_DOCUMENT_TOKEN_TO_BE_REPLACED
UK Marine Resins LtdCHOCKFAST ®

Chockfast® Gray (PR-610FR) is a specially formulated 100% solids, two component, inert filled compound developed for use in chocking non-precisely aligned equipment or in setting anchor bolts in concrete. The compound is designed to withstand severe marine and industrial environments involving a high degree of both physical and thermal shock. The compound is non-shrinking, non-burning and has a very high impact and compressive strength. Years of successful experience have shown the use of PR-610FR to be a far superior yet less expensive method of establishing and retaining equipment alignment under extreme conditions. When poured as a continuous chock under deck equipment, Chockfast® Gray provides a corrosion proof moisture seal. PR-610FR is approved or accepted for marine use by A.B.S., Coast Guard, Lloyd's Register and other regulatory agencies.

Chockfast® Gray is a highly flowable, two-component, thin pour “chock” designed to maintain proper alignment and support of machinery and equipment; able to withstand severe industrial environments with a high degree of both physical and thermal shock resistance.

Chockfast® Gray was developed as a chocking compound for use under marine deck machinery, pumps, generators and steering gears. Industrially, the compound is used under diesel engines, generators, compressors, pumps, turbines, bearing blocks, crane rails and numerous other applications. It is also used extensively in the setting of anchor bolts into concrete.

When used as a chocking compound for machinery, the Chockfast® Gray provides perfectly even support without the tedious hand packing associated with conventional cement grouts. Because the compound flows readily, much thinner cross sections can be used. The compound is also completely chemical and oil resistant, will not powder or crack with age, weathering, or freeze-thaw cycling, and will seal the mounting surfaces, protecting them from deterioration. Steel soleplates and rails between the machinery and the concrete foundations are not necessary with Chockfast® Gray.

Chockfast® Gray, like our other 2 component chocking compounds Chockfast® Orange and Chockfast® Black, are dammed, mixed and poured exactly the same way. 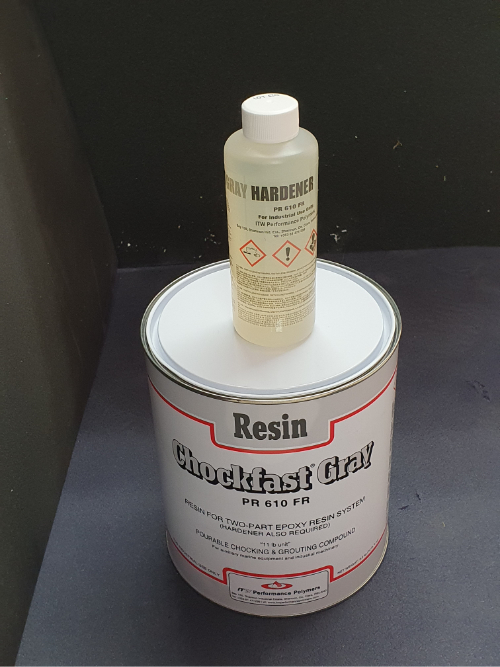